Every year we award an outstanding alumni for their work in the community!

We depend on you to nominate alumni that have gone above and beyond serving their community. If you have someone in mind, please use the form below to submit your nomination. This form can be submitted at any time through out the year.

OAA Alumni of the Year Form 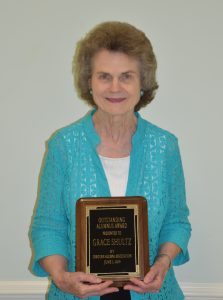 Our 2019 Award winner moved to Prince William County in ninth grade and graduated from Osbourn High School in 1958. Her fondest memories of high school are that her small class of 72 students was very close. A core group of these same students are still close today, sixty-one years later.

During her high school years, she met a boy at a party named Richard, who was from the Class of 1957. After dating for four years, they tied the knot. Sixty years later, they are still married and celebrated those six decades on May 2. She and Richard are the parents of two sons, nine grandchildren and are expecting their tenth grandchild in August.

After high school, she started working for the Prince William County School Board, while Richard served in the Air Force. Tonight’s award winner served as the Clerk for Payroll of the schools and then as the Secretary for the Director of Instruction. Eventually, her career path took her to Osbourn High School, where she served as the Administrative Professional for the Principal. She was the “go to” lady for eight principals over her twenty-nine years at Osbourn and just retired six years ago, in 2013. To honor her, the courtyard at Osbourn High School is named in her honor, and in a quirk of fate, the old Prince William County building where she had worked was torn down on the same day she retired!

She has been a supporter of the Osbourn Alumni Association for many years, has attended almost every banquet and has saved yearbooks for OAA and for the Manassas Museum. Involved with her church, Bethel Evangelical Lutheran Church, in a variety of ways, she has also been a forty-year volunteer with SERVE, a local help organization. Three awards she has received are the 1992 Governor’s Award for Volunteering Excellence, the 1993 Volunteer of the Year and the Founders Award for dedicated support of SERVE for forty years (1975-2015)

Eleven years ago, an employee at Osbourn High School nominated Grace for an Excellence Award. Here is what she wrote about Grace:

Mrs. Shultz displays a degree of professionalism that is difficult to match. No one is more respected at OHS than Mrs. Shultz. Grace is gracious in all her dealings with people. Her opinions and advice on all matters are highly sought and valued. She never seems to have a bad day and always treats everyone with respect and kindness. There is no one inside the walls of Osbourn High School that does not love Grace Shultz both as a professional and as a person. She is always gracious, polite, responsive and compassionate. She is a true lady and is the embodiment of “The Eagle Way.” If someone were to come into the main office at OHS and change the placard next to Grace Shultz’s door from “Principal’s Secretary” to “Associate Principal,” no one would have a problem with it!

Check out the former Alumni of the Year below!